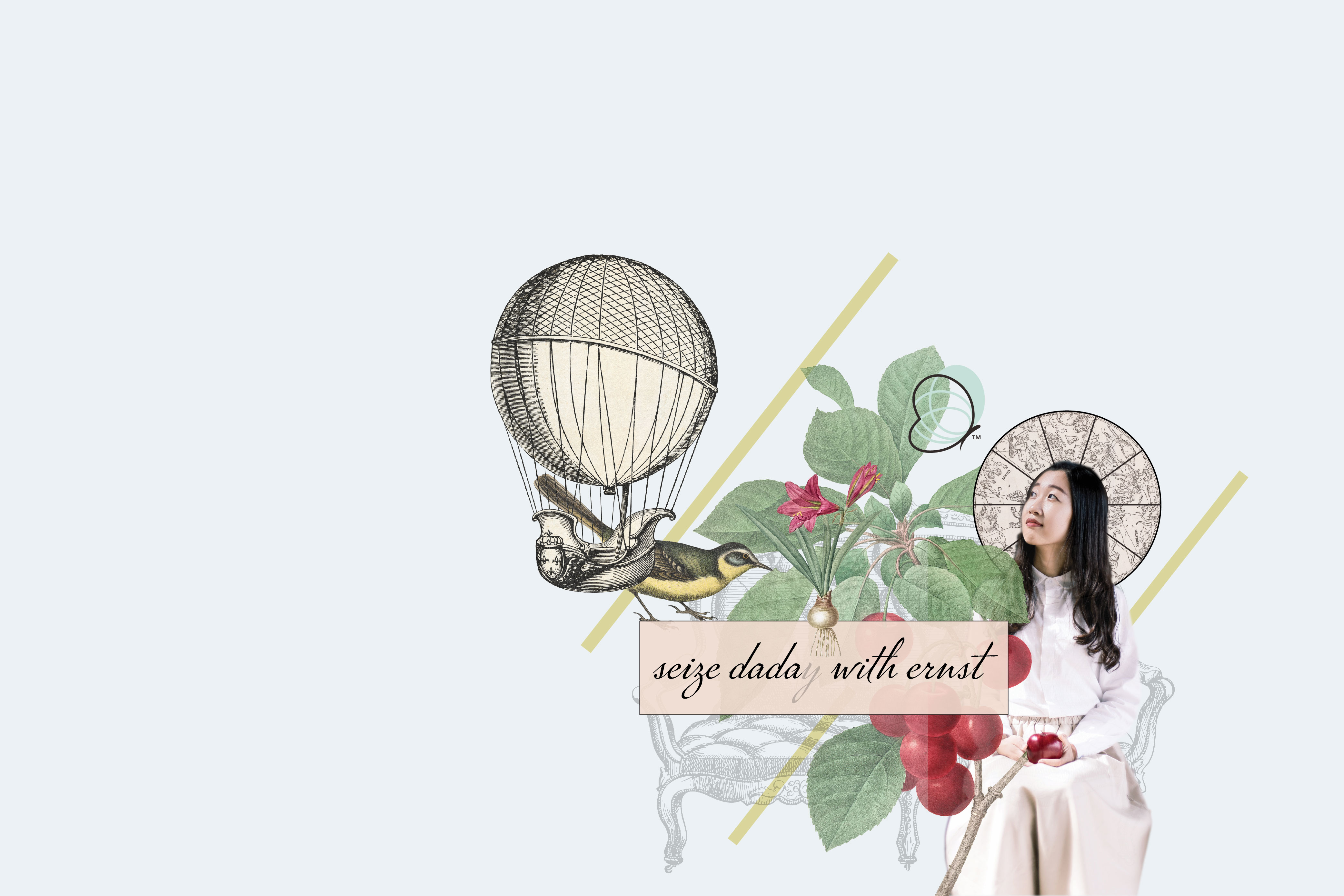 Dada is not a person. It was an avant-garde art movement that originated in Switzerland during World War I (or, as writer H.G. Wells optimistically called it, “the war to end wars”). [1] Europeans at the time faced a turmoil of social, cultural, political, and economic change. The brutality of WWI shocked the continent, spurring disillusionment with the status quo, while innovations like mass media and industrial manufacturing were redefining “normal.” Life was chaotic. The future was uncertain. Tradition was falling out of style. [2]

Dadaism emerged from this disorder in Zürich, Switzerland, where many intellectuals who opposed the war had sought refuge (Switzerland being a neutral country). There, artists Emmy Hennings and Hugo Ball established an anti-war art group, the Cabaret Voltaire. It grew quickly, and in July 1916, Ball presented the first “Dada manifesto.”

Dadaists had two goals. First, they wanted to protest WWI. Second, they wanted “to challenge and express their frustrations towards the bourgeois and nationalist attitudes that they believed led to the war.” [3] They accomplished these goals by embracing  “deliberate irrationality and negation of traditional artistic values.” [4]

…the focus of the artists was not on crafting aesthetically pleasing objects but on making works that often upended bourgeois sensibilities and that generated difficult questions about society... [5]

The original Dada movement ended in the 1920s. Now it’s making a comeback.

Posts tagged #dadaism have more than 31 million total views on TikTok. Memes and trends are embracing absurdity to cope with the existential anxieties that define generations Z and Alpha. [6]

Today, the world is undergoing significant change, much like Europe during World War I. We’re facing COVID-19, “code red” climate change, global conflict, social polarization, and innovation at an unprecedented speed. Once again, life is changing drastically. The future is uncertain. Tradition is not only falling out of style but is no longer possible for many young people whose opportunities and expectations are very different from those of their parents. So, it’s no surprise that Dada, repackaged for a modern audience, is experiencing a revival.

Dadaists invented photomontage: a form of collage that blends photographs and sometimes other elements, like paint and printed text. Dadaists often sourced their material from advertisements and journalism, allowing them to subvert excerpts from commercial and political culture. [7] Below, Hannah Höch’s photomontage, Cut with the Kitchen Knife Dada Through the Last Weimar Beer-Belly Cultural Epoch of Germany (1919), blends mass media clippings into new contexts. Kaiser Wilhelm II stands northeast of the center. A map of women’s suffrage sits in the northwest corner. The work shows how dadaists combined absurdity with subjective reality to critique the latter. [8] 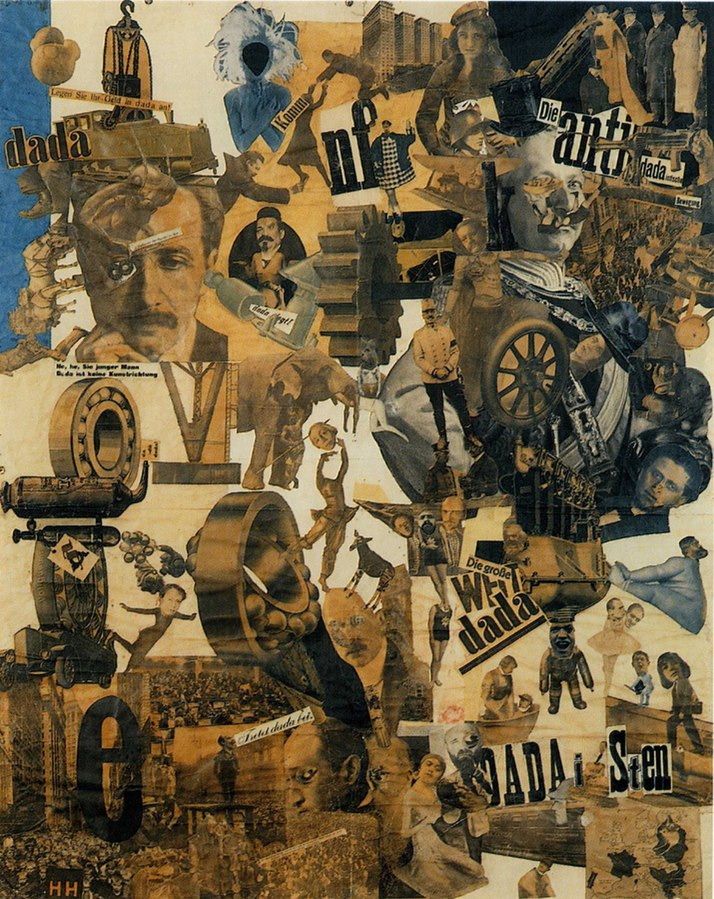 Dada's influence is evident in the style of many modern digital collage artists. Technology has made it easier than ever to source and splice images into photomontages. This process (and the role of tech in it) spoke to us.

In 2021, we rebranded. We didn’t relate to the dark, high-tech theme that seemed to dominate the artificial intelligence (AI) and data science space. Last century, these technologies were Science Fiction, associated with “dark media” like The Matrix and high-tech ideas like singularity. But they are now radically different.

The “reality” of AI and data science — their impact on real people — depends on who develops, uses, and talks about them. Yes, bad actors can use these technologies to harm, discriminate, and oppress. But good actors can also use them to incredibly positive ends. For example, Synaptiq has applied AI and data science to expand transportation accessibility in Rwanda and extend financial services to previously unbanked communities in Mexico. Our latest project uses AI to screen for the world's deadliest healthcare-associated infection. Other organizations have used AI and data science to remove plastic waste from waterways, fortify infrastructure against natural disasters, predict and prevent pandemics, and more. 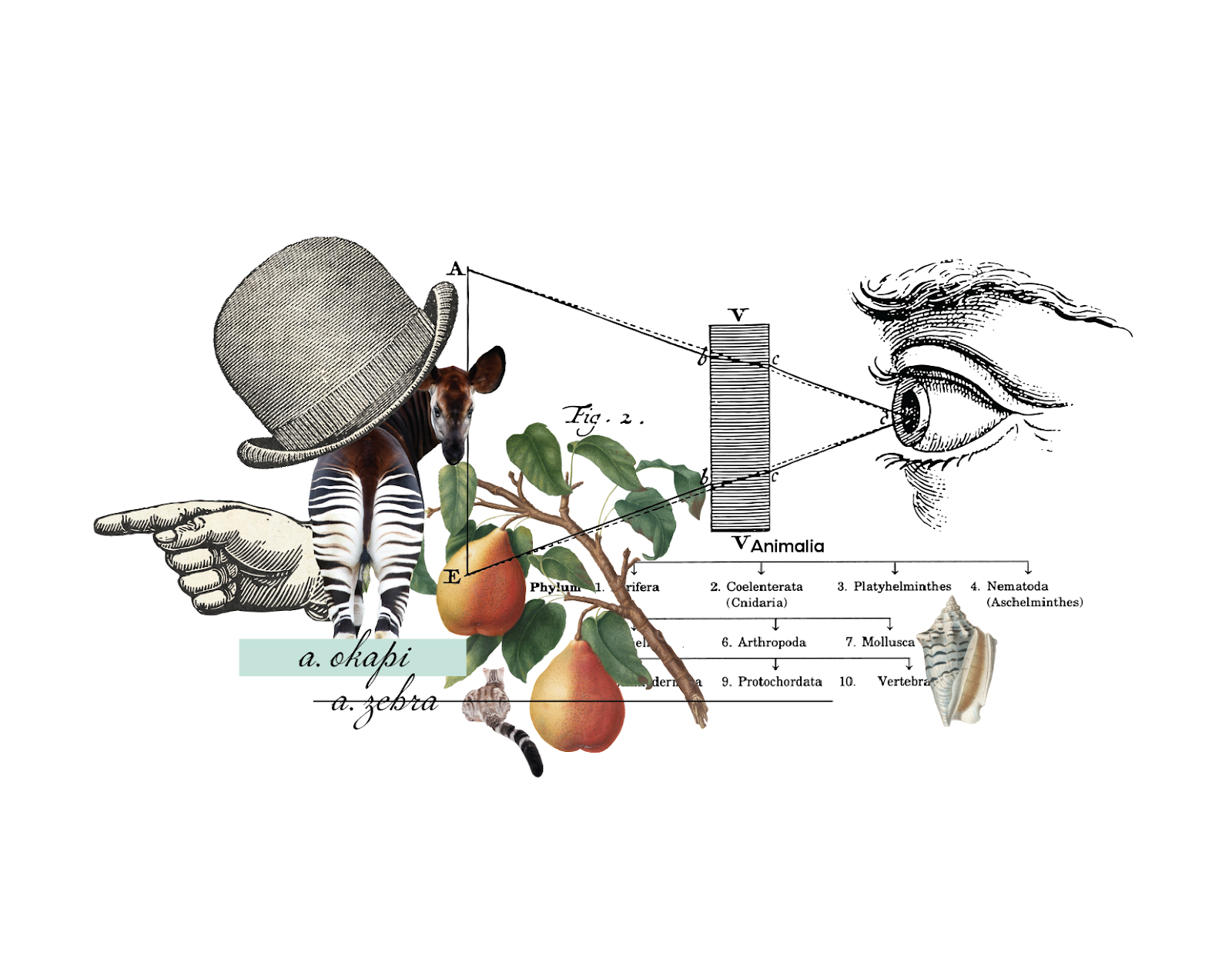 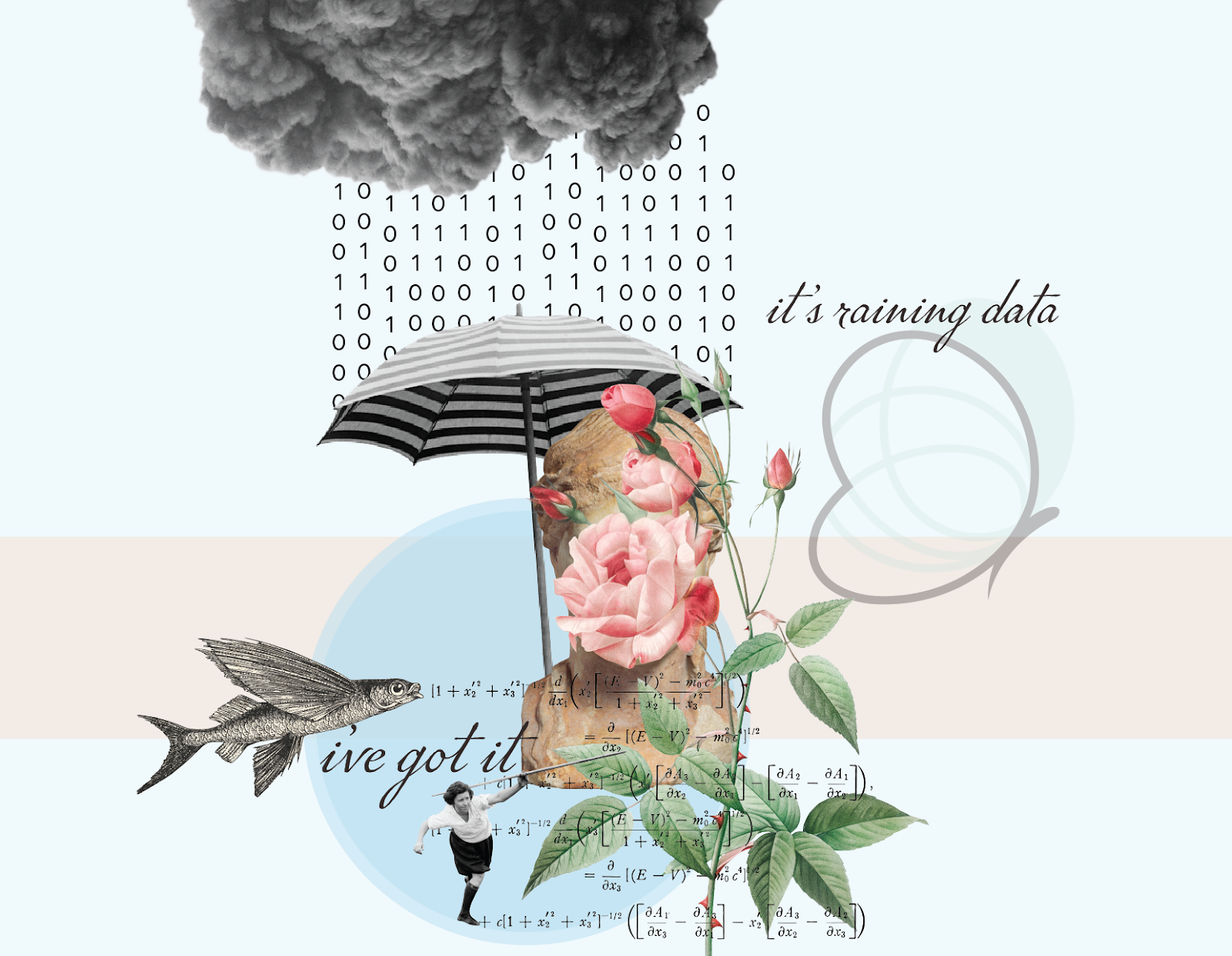 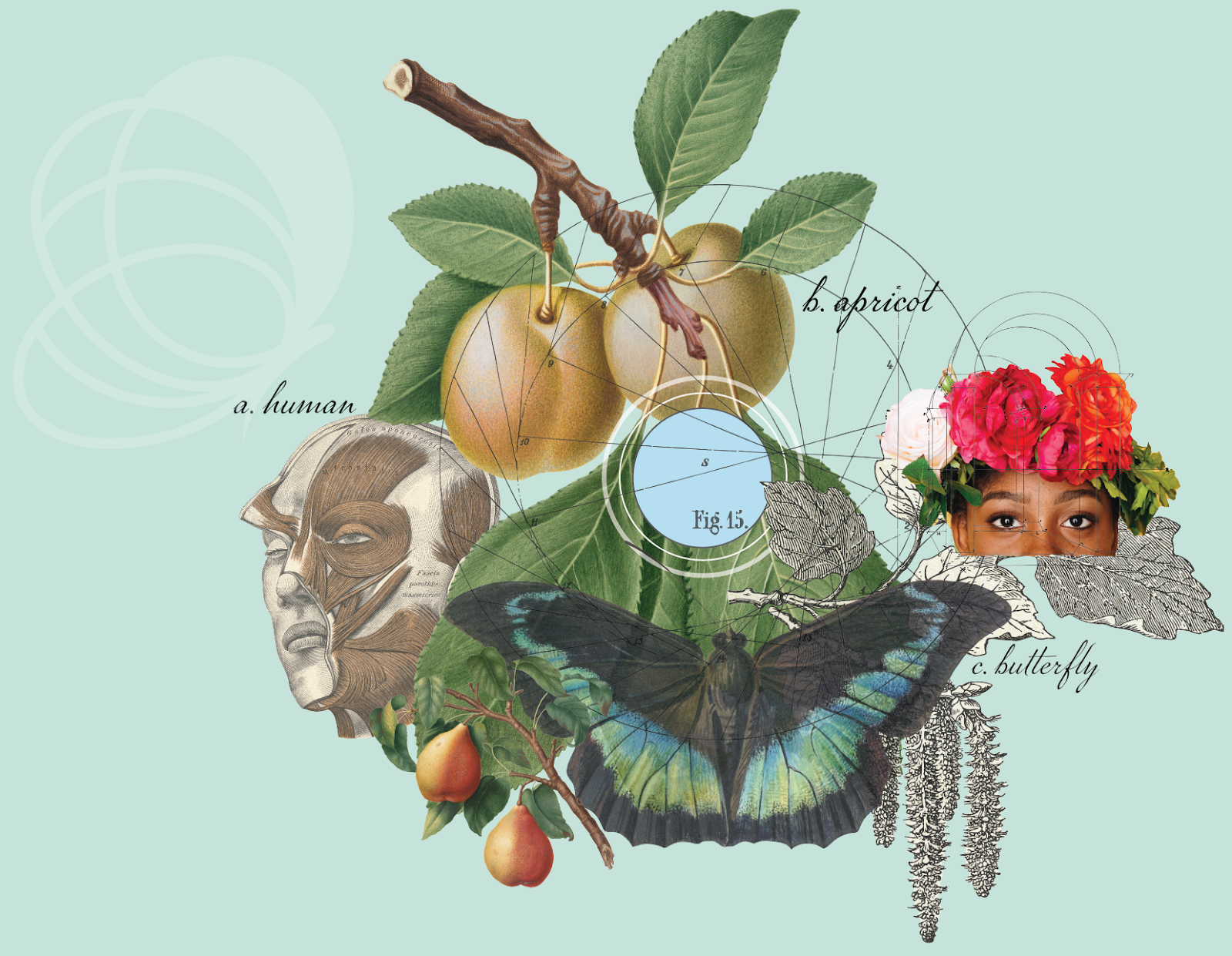 The digital collages featured on our website combine scientific and technological elements with natural, organic imagery. We hope that this artwork captures viewers’ attention with its absurdity and reminds them that AI and data science, in impact, is anything but artificial. We hope that it will inspire difficult questions about what these technologies “must” be, driving a movement toward a more human-centric understanding of their applications. Thus, our new brand showcases the public promise that we make to everyone impacted by our work (including our own employees): that we are committed to the human kind of innovation — the Humankind of AI.

Synaptiq is an Oregon-based artificial intelligence and data science consulting firm. We engage our clients in a collaborative approach to developing human-centered products and custom solutions while maintaining a strong commitment to ethics and innovation. We love our work, and we can't wait to learn about yours.

Contact us if you have a problem to solve, a process to refine, or a question to ask. You can learn more about our story through past projects, blog, or podcast.

Technology Could Help Us Understand Animals

We Helped a Non-Profit Expand Road Access in Rural Rwanda